This issue is lighter on news but fuller on fantastic glitch art created or forwarded by Glitchet readers. 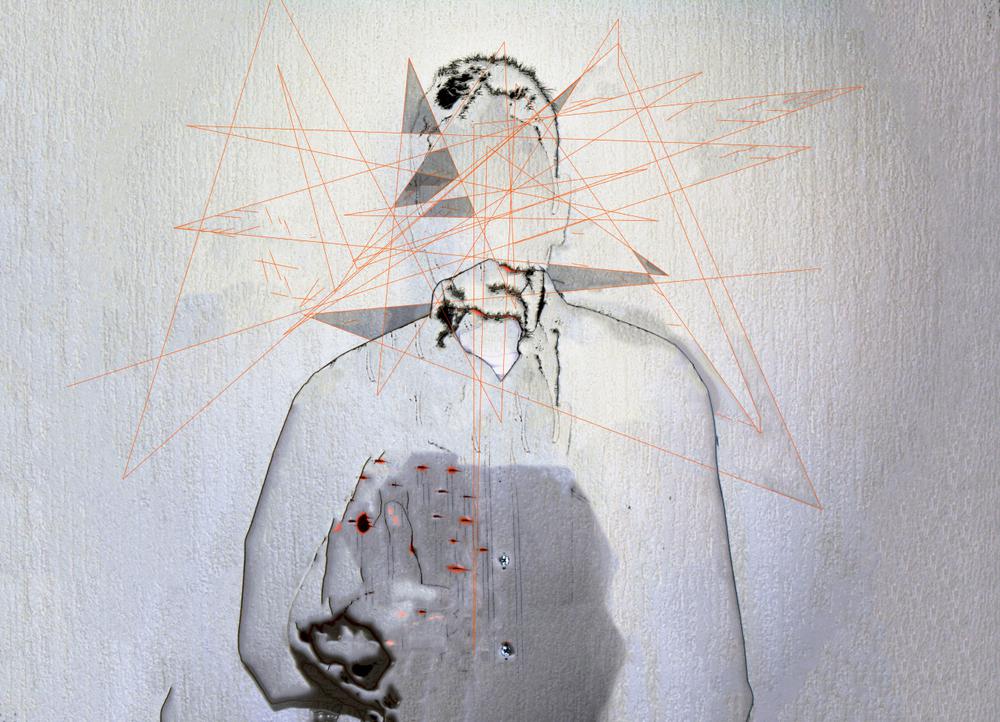 I finally got to a bunch of emails that y'all sent me and put the amazing stuff you create into one big super awesome newsletter! 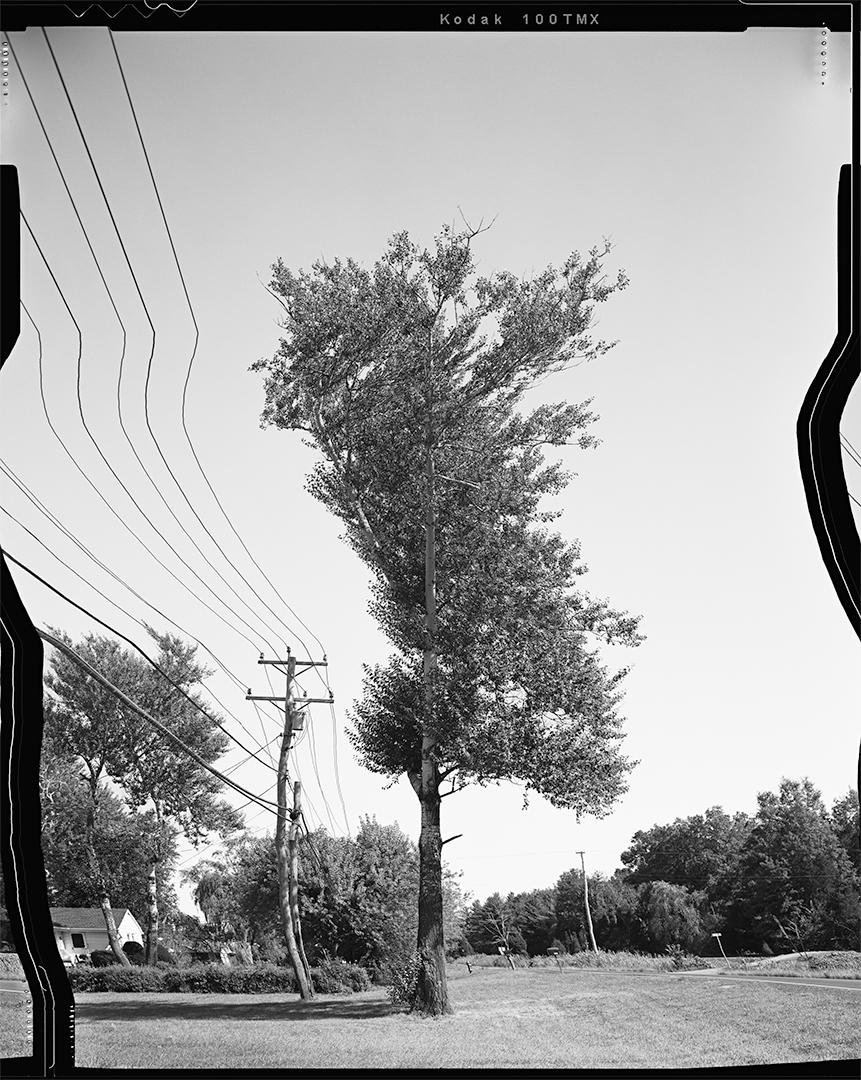 Daniel Temkin is one of the O.G. digital glitch artists, so I was thrilled when he forwarded his latest project, Straightened Trees. "They're tree images re-organized so that the tree is perfectly straight & centered, using a mix of Photoshop techniques and custom code."

A Kickstarter for a very cool-looking short film - an "eye warping journey through infinitely patterned space and grid time." Thanks to Sam Lawrence for the forward!

Slit-scan camera delay effects in your browser! Uses your webcam, creates cool gifs. Thanks to Josh Beckwith for sharing his awesome creation. 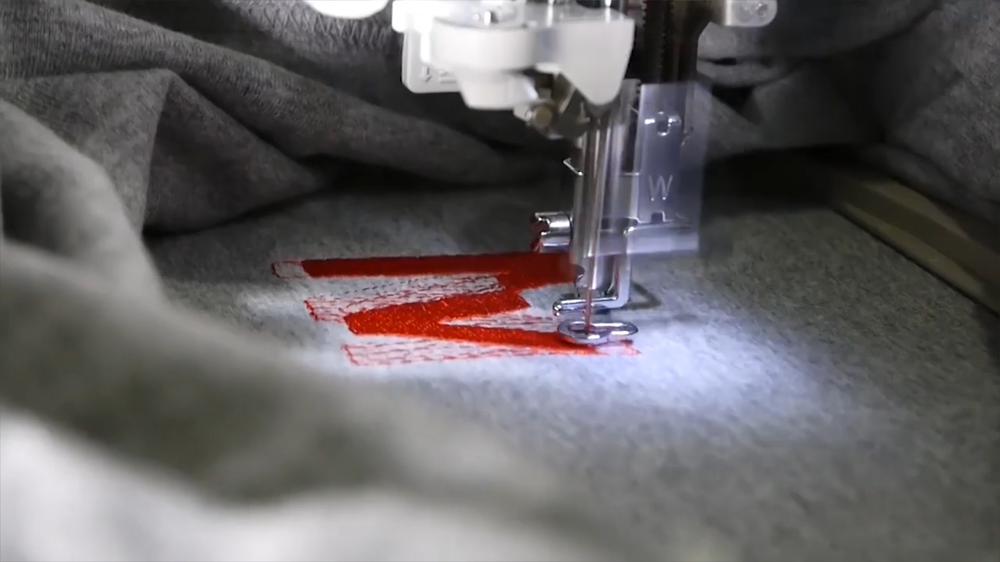 Anne, director of the show toco toco, forwarded this fantastic episode Nukeme, a glitch fashion creator and artist "who hacks sewing machines to create glitch embroidery or datas collected on net to create various works." Worth a look to get an interesting insight into the intersection of Japanese fashion and physical glitch. 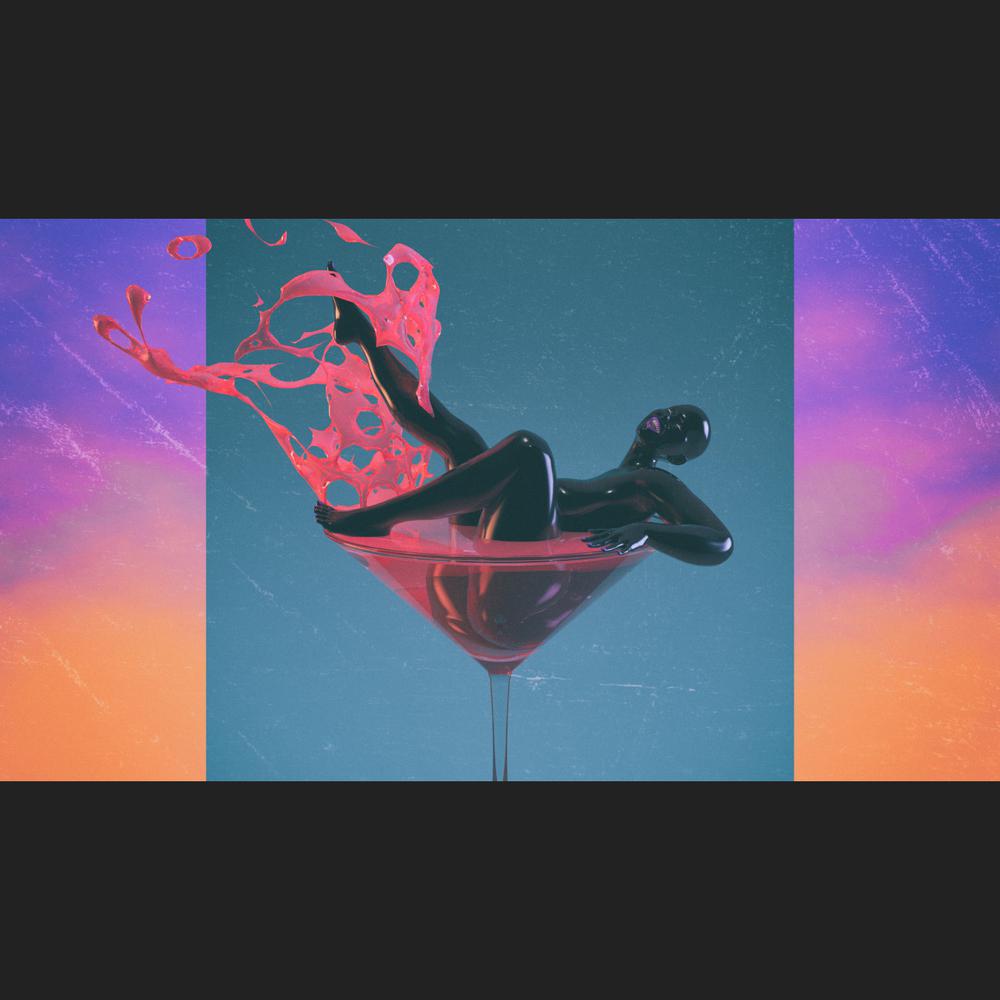 Hypercolor, ecstatic, noisy, simultaneously beautiful and disruptive visualizations are in this great, short music video. The music is created by Nico Antwerp, a Genoa-born and London-based electronic music producer and sound artist, and the video by Benjamin Sammon.

Interested in how the above video was made? Here's a description, attached by Nico:

Using a combination of analogue video techniques and editing software I create nostalgia inducing, ultra vibrant, glitched out colourscapes. My production technique is slightly unconventional for modern video post-production. Whereas most would create visual effects in software such as Adobe After Effects I use a chain of analogue video effects processors seen by most as obsolete. This includes a mixer based on the Karl Klomp dirty mixer, which I built into the body of an old stills camera, combining two different video inputs to create a messy glitchy output. A mixer built into an incense pyramid, which glitches the video signal based on the volume from an audio input. I also use the Critter and Guitari Videoscope, which is essentially an oscilloscope creating a video waveform of the audio input. Plus, my favourite piece of gear is the Tachyons+ Fun21; a circuit bent Archer Video Processor, originally made for people who wanted to improve the quality of their home movies back in the 1990’s. 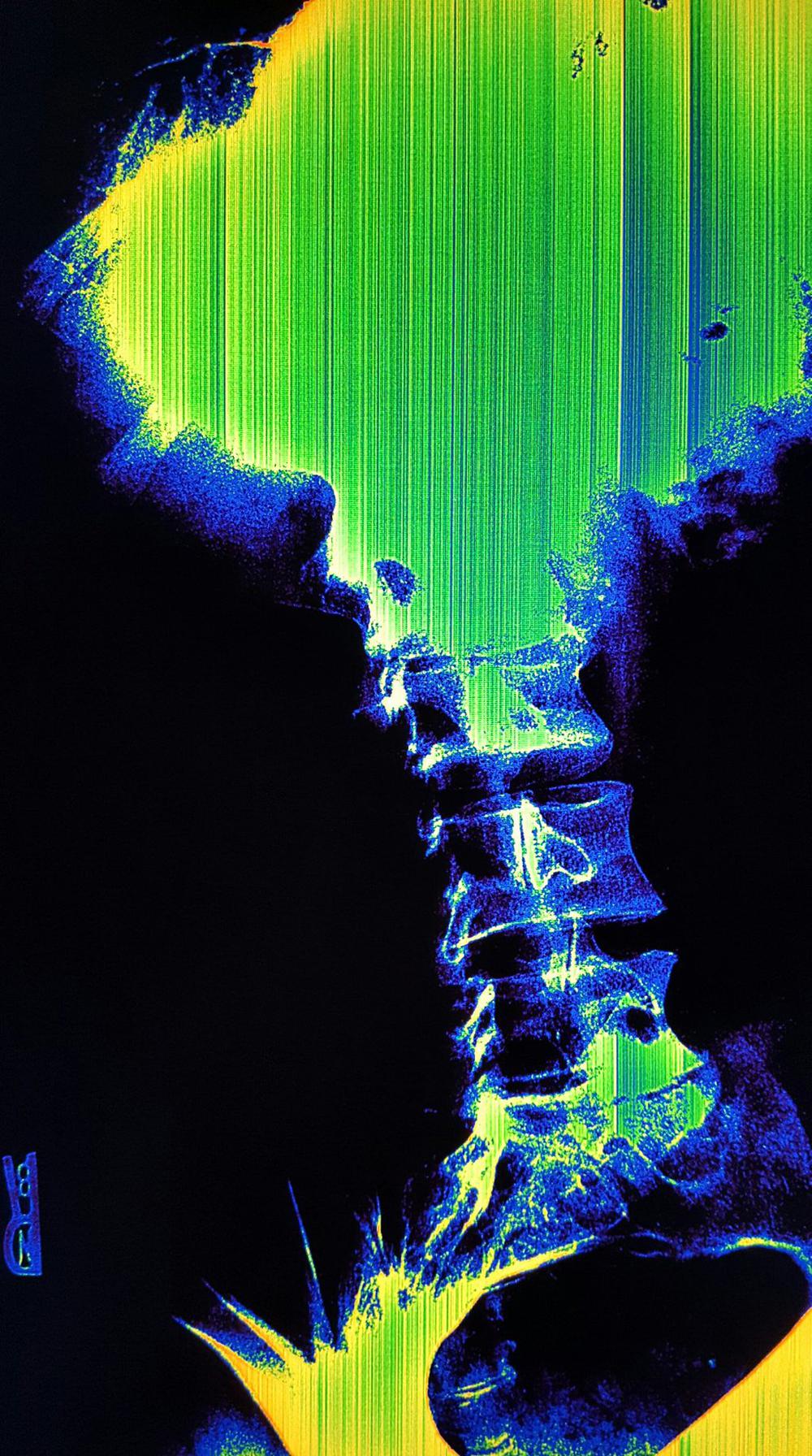 "Big, unexplained glitches, lumbar spine x-ray." (thank you to Aneel for the forward!) 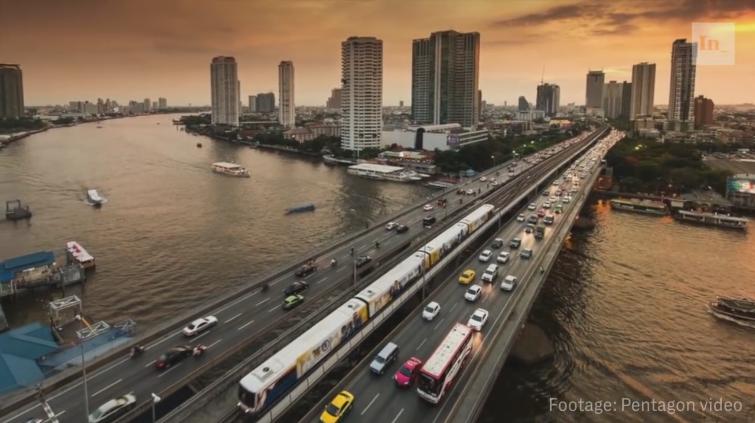 According to the Pentagon, "cities in 2030 will be hives of scum and villainy (plus Bitcoin and Anonymous)."

NASA is great at Halloween because space is genuinely terrifying

Yes. My most irrational fear is that of dying space. MAYBE IT'S NOT SO IRRATIONAL THOUGH, HUH? Maybe we're going to go to space soon to get off this dying planet?! Maybe I'm going to spiral out into the voi--OK, moving on. 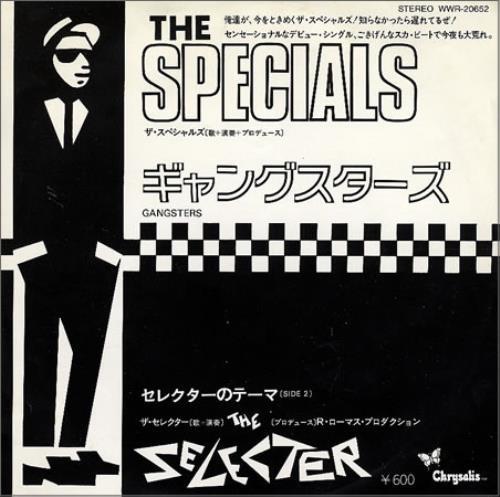 The Secret Ska History Of That Weird Levitating Businessman Emoji

Short and skinny of it: one of the people in charge of emojis used to be in a ska band and one of their logos had a dude in a business suit on a flyer, and it stuck as an emoji. 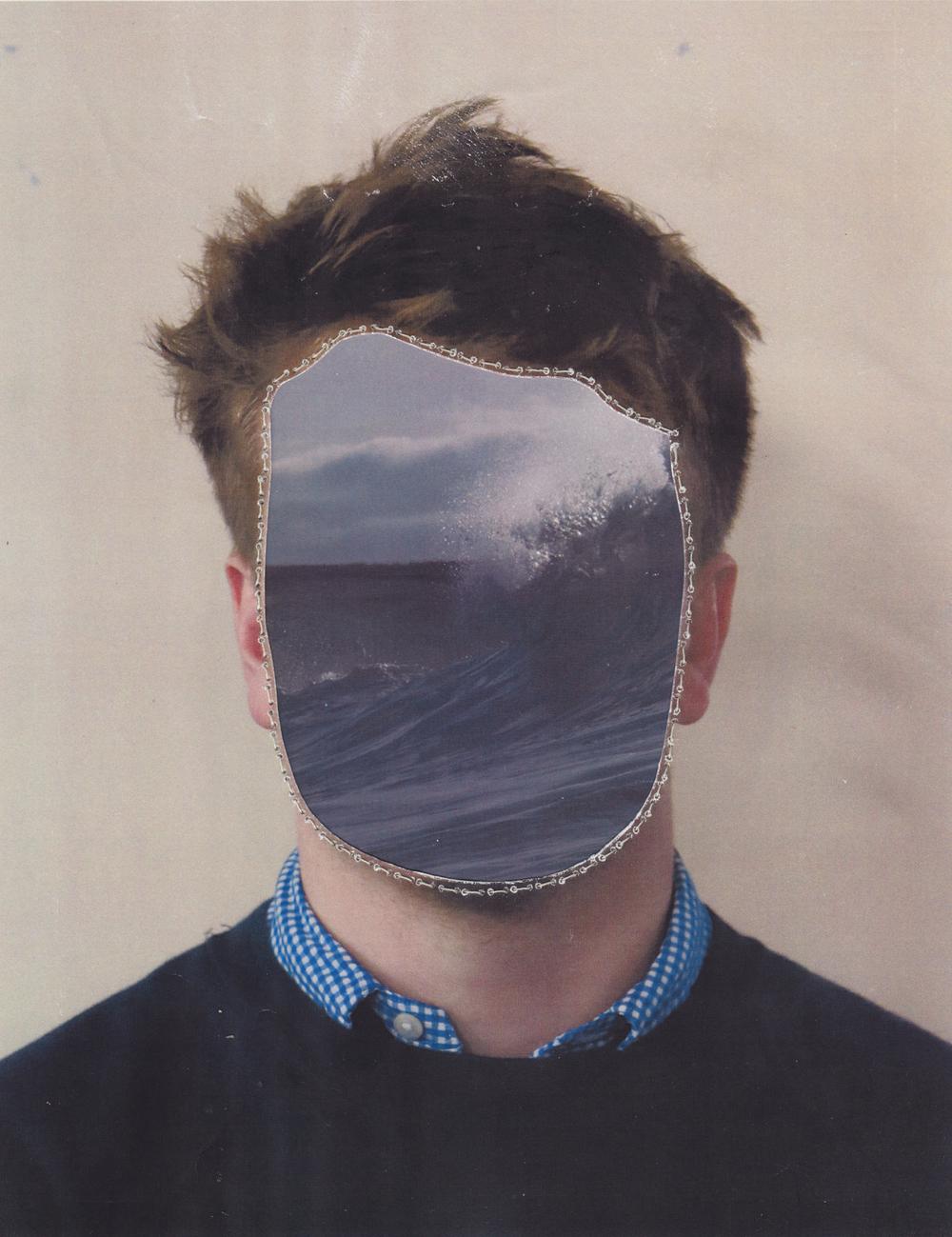 In case you like the news more than you like the glitch art, we'll be back to our regular news-packed issue next week. I just really had to catch up on some submissions and go to roots: glitch art!

Quick announcement! Sonya Mann of Exolymph fame and I have been running the Cyberpunk Futurism Chat Slack group for a while now and we thought it'd be cool to open it up to Glitchet members, too. So I'll be including a link to the signup page at the bottom of these newsletters in case you want to come chat with us (and here's the link right here today, too).

Tell your friends about Glitchet! They deserve it. Comments, rants, rambles, and hellos directly to [email protected].